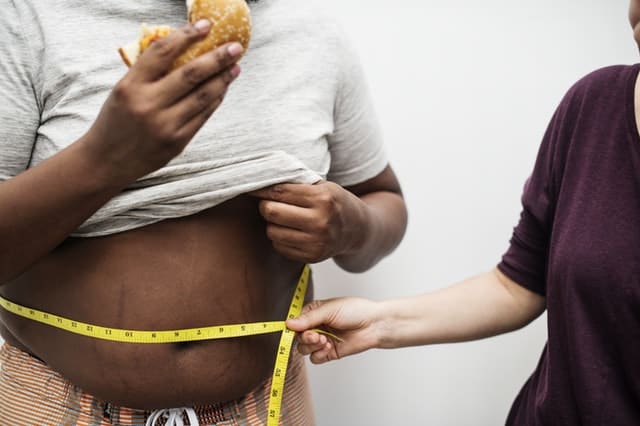 When we think of “obesity”, we think of an overly large person who struggles to walk or catch a breather. There are several ways to define it, though most of them carry the same meaning.

One way to define it is someone is considered obese when his or her body weight exceeds what it should be by 20% (MedicalNewsToday). The World Health Organization (WHO) defines it as the excessive fat accumulation that presents a risk to one’s health.

For adults, the ranges for overweight and obesity can be measured using the body mass index (BMI), a value that is derived from your weight in relation to your height. Though it is not an accurate representation of one’s body fat, it does give a rough idea on his or her overall fat composition and physical well-being.

The table below shows the values of the BMI reading and their corresponding categories:

Besides BMI, another method to estimate body fat distribution and body fat percentage is via waist-to-hip ratios, skinfold thickness, ultrasound, and even magnetic resonance imaging (MRI).

Believe it or not, there are multiple factors of obesity, and it’s not just overeating. Science has proven that genetics and illnesses can increase the chances of being obese.

Genetics do play a role in obesity; however, it is quite rare. Monogenic obesity is a rare form of obesity, and it is because of spontaneous mutations in single genes. This is called a monogenic mutation. These mutations are found in genes that are instrumental in appetite control, food intake, and energy homeostasis. There are genetic syndromes, too, such as the Prader-Willi and Bardet-Biedl where obesity is commonly accompanied by mental retardation and reproductive anomalies.

The growing trend of obesity isn’t exclusive to the western world. In many developing countries, obesity is growing at a steady rate. According to a study in the New England Journal of Medicine, 12% of adults and 5% of children in the world are obese[note]Gregg, E. and Shaw, J. (2017). Global Health Effects of Overweight and Obesity. New England Journal of Medicine, 377(1), pp.80-81.[/note]. High-energy foods are readily available, and they’re as convenient as ever. Unfortunately, a lot of us work regular nine to five office jobs and barely get any physical exercise done. When you’re self-reflecting, ask yourself these questions:

Obesity doesn’t happen overnight. Unfortunately, our bad habits and small chunks of laziness build up over time, and by the time you realize you’ve gained weight, these habits have been embedded into your lifestyle! If you’ve finally realized this, is time to stick to your fitness routine!

Overeating is when one consumes more calories than he or she burns off, resulting in excess energy stored as fat. Unfortunately, most of us don’t realize this. In a study done to measure the calorie and portion increase in 18 recipes over time, it was found that in 18 recipes, 14 of those has seen an increase of calories by nearly 50% in a 70-year time span[note]Wansink, B. (2009). The Joy of Cooking Too Much: 70 Years of Calorie Increases in Classic Recipes. Annals of Internal Medicine, 150(4), p.291.[/note]. Portion sizes per serving in America are getting bigger, and so are the waistlines of the citizens.

The link between obesity with cardiovascular risk factors, such as high cholesterol, high blood pressure, and diabetes has been well documented by science. For instance, a study from JAMA Cardiology concluded that overweight and obese adults between the ages of 40 to 59 had a 21-85% higher chance of developing cardiovascular disease, compared to those of normal weight adults[note]Association of Body Mass Index With Lifetime Risk of Cardiovascular Disease and Compression of Morbidity.[/note].

Overweight or obese people add pressure to their body’s ability to properly use insulin in controlling blood levels. This is because the body needs to work harder in producing more insulin to transport the glucose into adipose tissue cells, which can lead to failure in insulin production.

The extra weight an obese person puts extra pressure on the heart. During the “relaxation” phase of the heartbeat, or diastole, there is increased pressure in the heart. Over time, this can cause people to have heart failure symptoms.

Other common health consequences of diabetes include:

The best way to reduce these chances is to lose that unnecessary fat!

Overweight, obesity, and the diseases associated with them have a significant impact on the U.S health care system economically, considering that an estimated 160million Americans are obese. Currently, estimates for the cost of obesity range from $147billion to $210billion per year. Medical costs that are linked to overweight and obese may include both direct and indirect costs.

Direct cause: Fees charged to the patient that may include preventive, diagnostic, and treatments that are directly related to obesity

Non-direct cause: Relates to morbidity and mortality costs. Morbidity is the income value lost due to decreased productivity, absenteeism, and bed days. Mortality cost is the value lost in future income, due to premature death.

Researchers from the Institute for Health Metrics and Evaluation found that at least 2 billion people worldwide are either overweight or obese[note]Health Effects of Overweight and Obesity in 195 Countries over 25 Years. (2017). New England Journal of Medicine, 377(1), pp.13-27.[/note].  In America alone, there are more obese adults than ever. Researchers found that Americans make up about 13 percent of the world’s fat population, which is the greatest percentage from any country.

The graph below shows the increasing trend of obese American Adults from 2009 to 2016:

The following animated map first appeared on the Government’s CDC (Centers for disease and control) website. Unfortunately, it’s not available anymore on the original website.

Obesity Rates By State (US)

Hey guys, thanks for reading. This website should help you cut through all the bias and make an informed choice with supplements. I was like you 2 years ago, trawling the internet looking at review, after review, after review. But now that's changed and I've taken my years working in the supplements industry to create this website and help you make the right choice. If you like something please share on social media! Or drop me a message. Always good to hear from you guys.