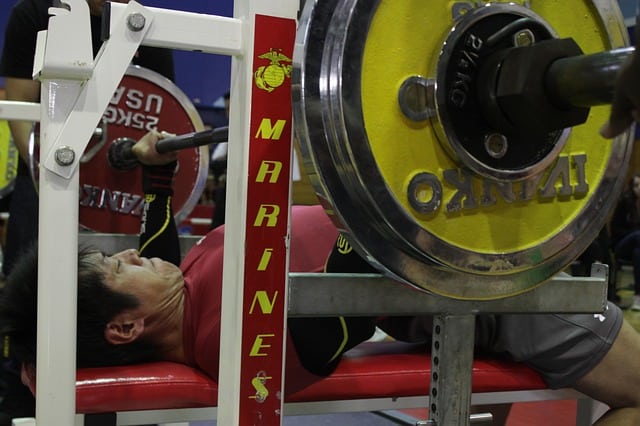 The bench press is the standard upper body exercise for the regular gym goer; the little lie down in between the real lifts in powerlifting but, also; one of the best strength and muscle builders for the upper body.

Compared to some of the other big compound lifts, eg – the squat, deadlift, or even the Olympic style lifts, the bench press does not seem that technical on first viewing. Afterall, you lie down, bring a bar to your chest and then push it back to the top, what more is there to it?
A fair bit more, actually, especially if you get into the powerlifting, arched back style of pressing.

What is a Bench Press?

A bench press is where you lie yourself down on to a bench, unrack the bar and bring it down to your chest (no, don’t argue, all the way down, it’s a bench press and not a spoto press) and then push the bar back up so that your arms are locked out and then you rerack the bar.

This will vary amongst individiuals. The longer your arms, the wider your grip and the more chest you involve. Play around with it and see what works for you.

Let’s break down the movement

Above, I mentioned how the bar should go up from your chest and back. This movement should resemble a reverse ‘J’ shape, this is so the bar travels in the most efficient manner and uses the correct muscle groups at the correct times.
If you want to look into this more thoroughly, I highly recommend this article by Greg Nuckols.

What muscles does it build, though?

I know a good deal of you will be looking at this in order to know which muscles it truly helps to build. (For those of you who want to know more about the strength, or even the powerlifting technique of it, I’ll come back to that later). Basically, its mainly for the chest, shoulders and triceps.

Is it the best exercise for building the muscle in those areas?

In a word, no. But it is one of the best for building strength in that area. If you’re more of a bodybuilder than a strength athlete then this is still important.
More strength means more volume and more volume means more chance of hypertrophy. This is why a good bodybuilding routine will include strength work, and vice versa.

For specific muscles there are exercises that will target them specifically, i.e – the flyes for the chest, raises for the shoulders and skull crushers for the triceps. Training these will promote more stimulus for growth in these areas and can lead to a bigger muscle and therefore more potential for strength in these muscles, but they won’t build much strength in themselves. Afterall, no body asks how much you flye.

As explained above, it is better for strength development than out and out muscle building. Granted, the push press might develop more strength but this does not include the pectoralis muscles to a major extent. So as a compound movement the bench press is more efficient for building strength in more muscle groups.

In terms of the muscles and joints involved, the bench press is the best all around pressing exercise for size and strength.

A lot of powerlifters love squats and deadlift but just accept bench as the one in the middle of them. This is normally because its lower loads than the other two and it is actually more technical. As I said earlier, it is more than just lying down and pressing.

The rules in powerlifting explain that –

The above points help to explain the reason for the arched back in powerlifting. There is no rule for where the lower back should be and by raising it (and, therefore, the chest) the bar has less space to travel in between the judges calls. The arch is safe, your back is strong in that position, and it allows for a smaller range of motion.
Another way to decrease range of motion is to have a wider grip (as far as index finger on the outer rings).

The bench press is an excellent mass and strength builder for the upper body but it can be benefitted by strengthening the muscles involved, as well as those opposing it.

If you’re not doing it, you should definitely consider adding it to your repertoire. Especially if its on a Monday, that is International Chest Day, afterall.

Mastered the bench press? Then why not take a look at the top compound movments.