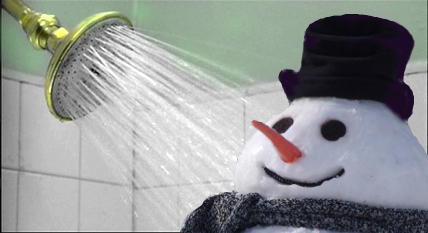 9 Benefits of a Cold Shower

You’ve had a hard workout in the gym. You’re tired, sore and feel like you’ve just gone ten rounds.

The last thing you want is to jump in the shower. Let alone a cold one. But having the balls to get under the icy blast of cod water could provide you with some benefits you’ve not even considered.

So should you embrace the cold? Is it worth it?

If you want to improve your health then you want to nourish your organs with oxygen-rich blood as much as possible. As soon as that icy blast touches your skin, your blood will travel as quick as it can deep down to your core – heart, digestive system and other life-preserving organs. It does this to protect your organs. But the stimulatory effect is great for overall cardiovascular longevity.

Will a cold shower replace the need for a calorie deficit? No. Will it get you ripped in a matter of days? No. But what it will do is point you in the right direction.

Cold temperatures stimulate a type of fat cell called brown adipose tissue. And these guys are your best friend. Unlike white adipose cells that store fat, brown cells activate fat burning – by as much as 15 times more than normal.

It could be that you’ve just had a hard HIIT session in the gym. Maybe you’ve just come off the back of a long run in the hot sun. It might even be that you’ve not trained at all and you’ve only just rolled out of bed. But regardless, if you want to improve your vigor and get your day off to a good star then a cold shower is all you need.

As we’ve mentioned, when cold hits your body it forces blood to move towards your internal organs. It’s a way of preserving internal body temperature and making sure you protect your heart and so on. Your breathing gets deeper and your pulse begins to race. Both of these force you to supply your body with more oxygen, helping you to feel energized for the rest of the day.

Not only can a cold shower elevate your metabolic rate, it can also make you less likely to fall ill. Your blood doesn’t only carry oxygen-rich red blood cells, but white cells too. These specialist cells are responsible for fighting off bugs, infections and pathogens. If these guys aren’t doing their job then it’s guaranteed you’ll fall ill.

Cold showers aren’t just about your body, they’re about your mind too. If you want to toughen up, strengthen your central nervous system or just push your comfort zone then low temperature water is the way to go.

The first few times you’ll struggle. You’ll wonder if it’s worth it. But stick with it and after a few weeks you’ll have a zen-like strength that’ll transfer to other areas of your life too.

One of the big killers to your sperm count is high temperature. Sitting with your legs crossed, resting a laptop on your legs or tight underwear can all reduce your fertility. Even a hot bath could act as an effective contraceptive. A nice icy blast on the boys will help to keep your swimmers fighting strong and virile.

What’s lymph? It helps to carry waste products away from your cells. So as you can imagine, it’s pretty important.

So by optimizing your lymph you can avoid infections and improve wellbeing. It also works hand in hand with your white blood cells to improve overall health too. And here’s a little trick – if you want to really boost your lymphatic drainage then alternate between hot and cold showers. A term called ‘contrast therapy’.

This one isn’t as sciencey as the others. But it doesn’t need to be either. You feel tired? Struggling to come round from a late night? Hungover to shit? Then a quick 5 minute cold shower will get you ready for the day and raring to go.

You’re in a tough training phase and you’re beating your body up in the weights room on a pretty regular basis. And without optimizing recovery you know you’ll not see the progress that your effort deserves.

Cold showers can help you reduce DOMS – delayed onset of muscle soreness. This is that awful feeling of discomfort you get in your muscle for a day or two after a big session.

It might sound counter-intuitive but taking a nice cold shower promotes sleep, which is paramount for re-building damaged tissue, not only muscle but every single cell in our body.

In 2011, at the annual meeting of the American Academy of Sleep Medicine a research paper was presented with solid evidence that a cold shower might be safer, better alternative to sleeping pills and supplements like Melatonin. The cold shower, study claims, calms down the racing parts of the brain in people who have problems sleeping.

It works just as well as a technique scientists call “cerebral thermal transfer” (which is basically a different way of describing the use of cooled down plastic caps to calm down the frontal cortex of the brain).

Bottom line – if you’re a hot sleeper, you might not need to go out shopping for that cooling mattress pad after all, a simple cold shower might do the the trick.

So there you have it. There’s more than enough reasons here to jump under the cold jets of an icy shower. And whilst it might be uncomfortable for the first few days, it well worth sticking with.